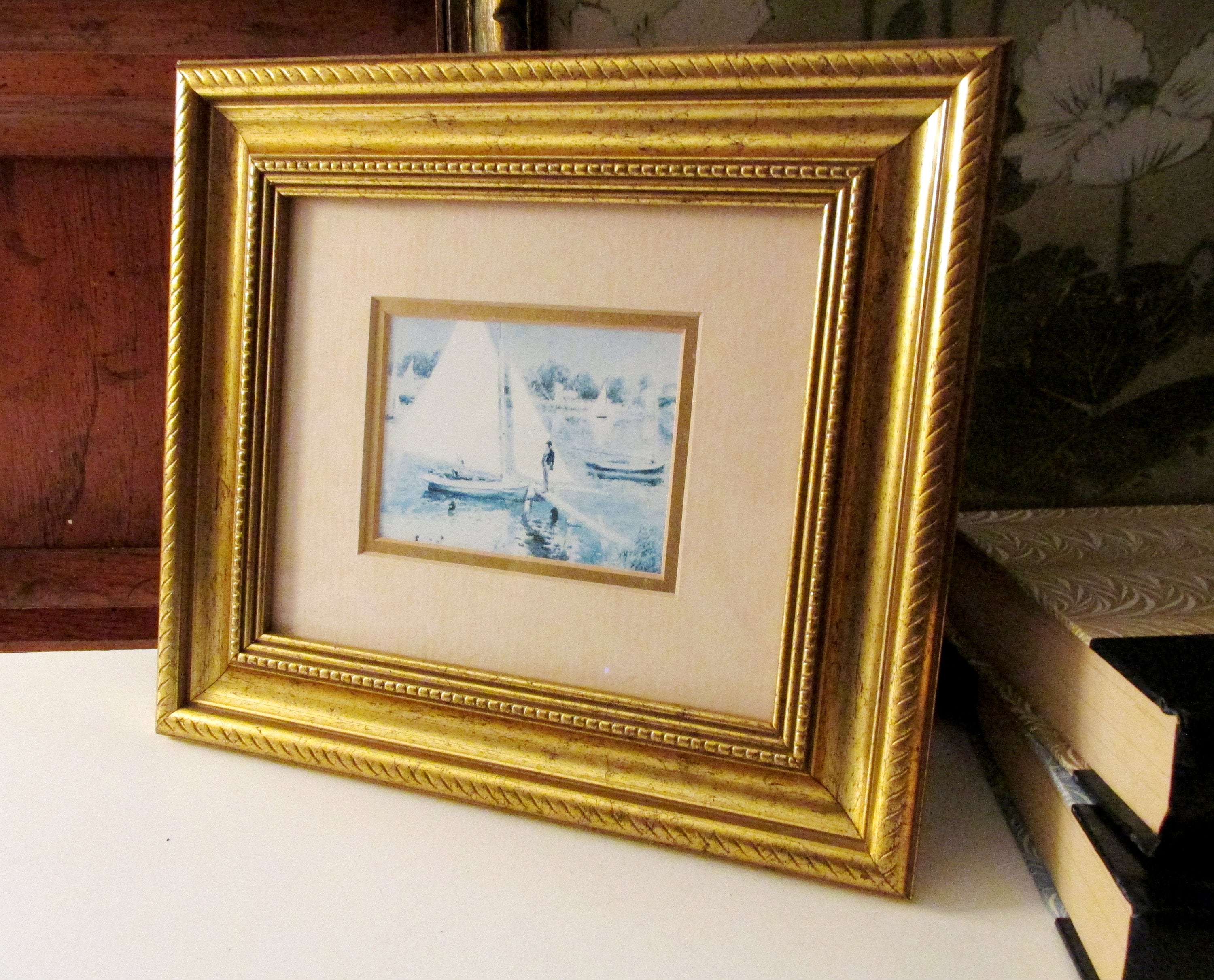 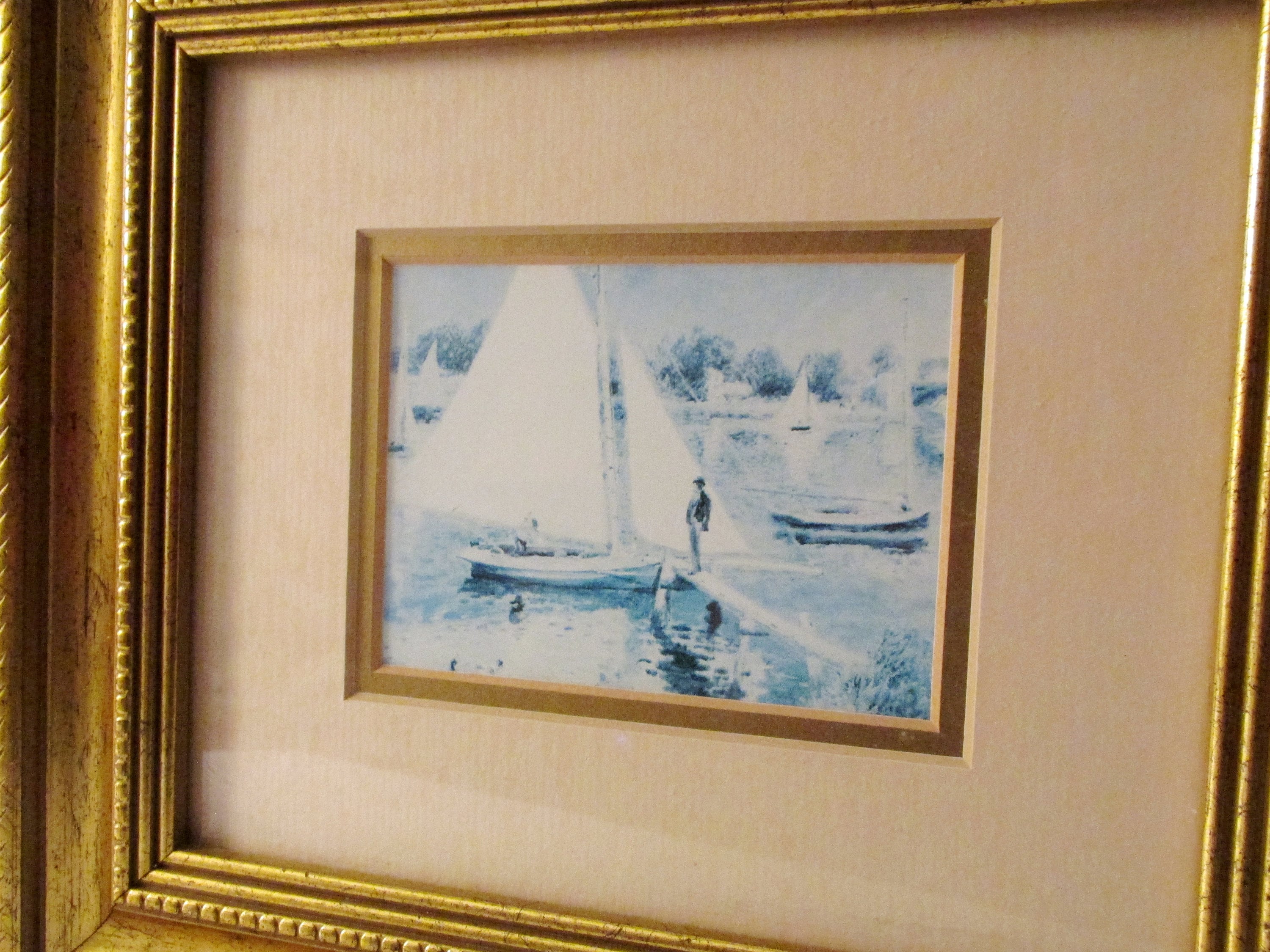 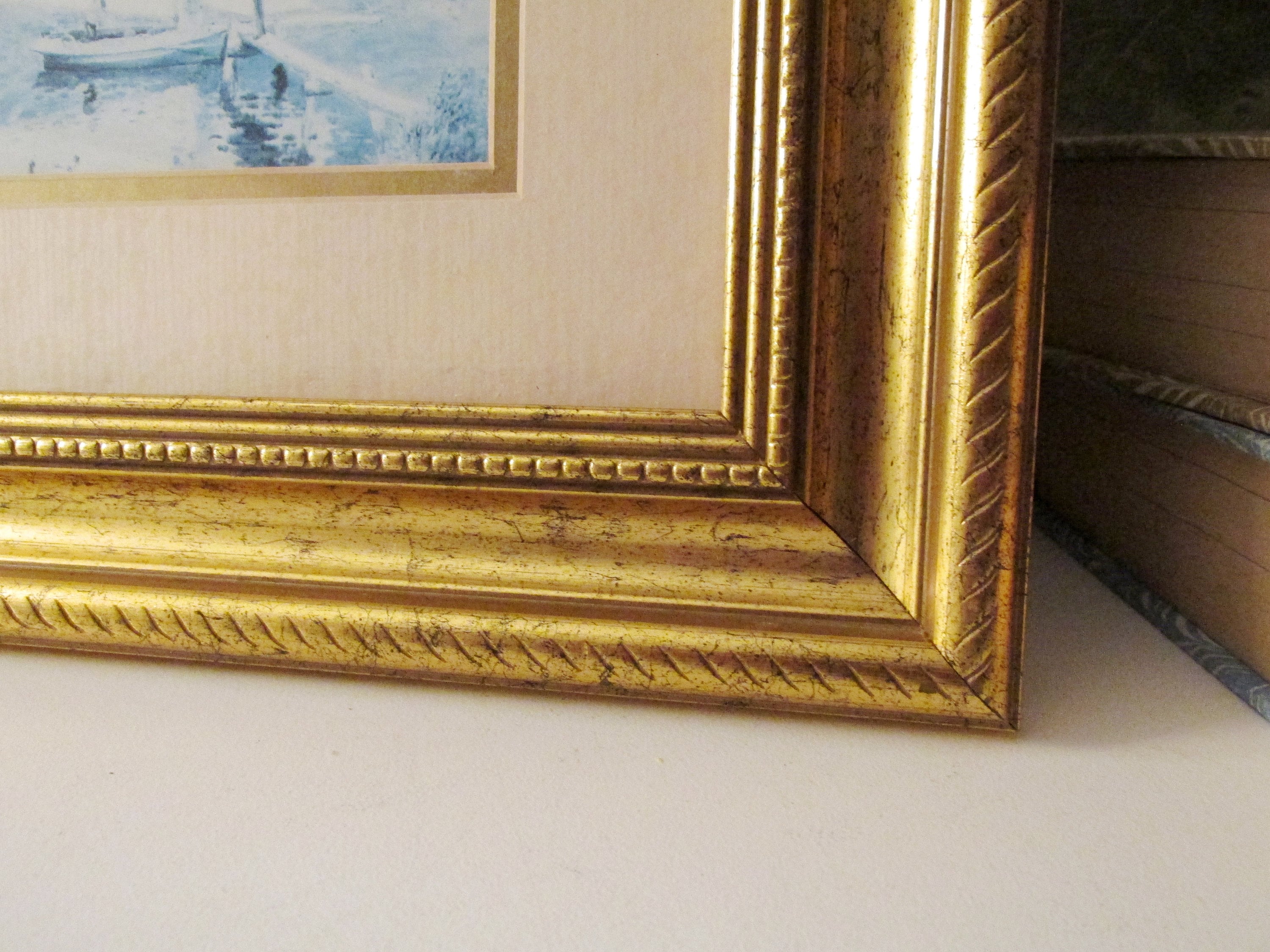 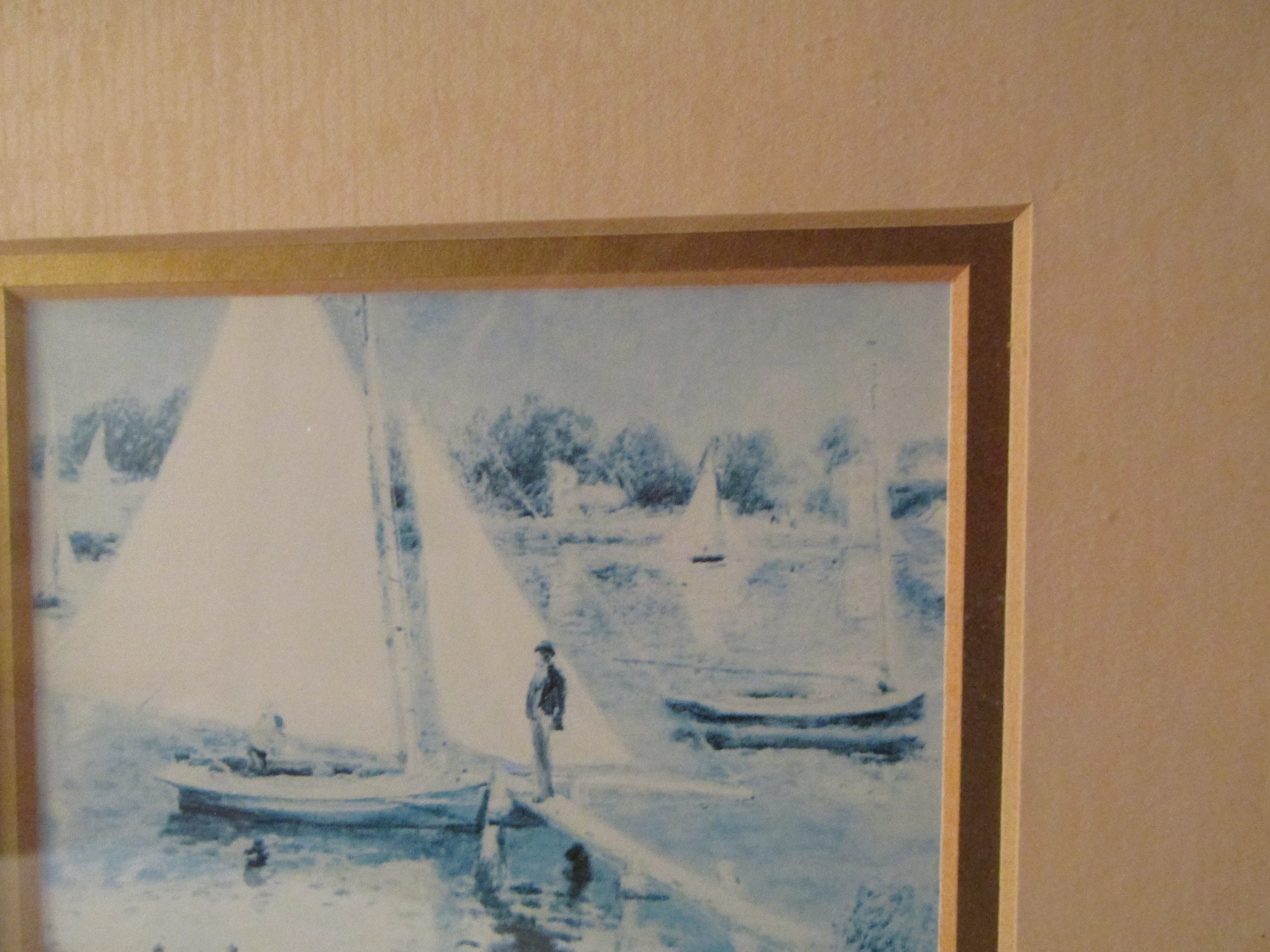 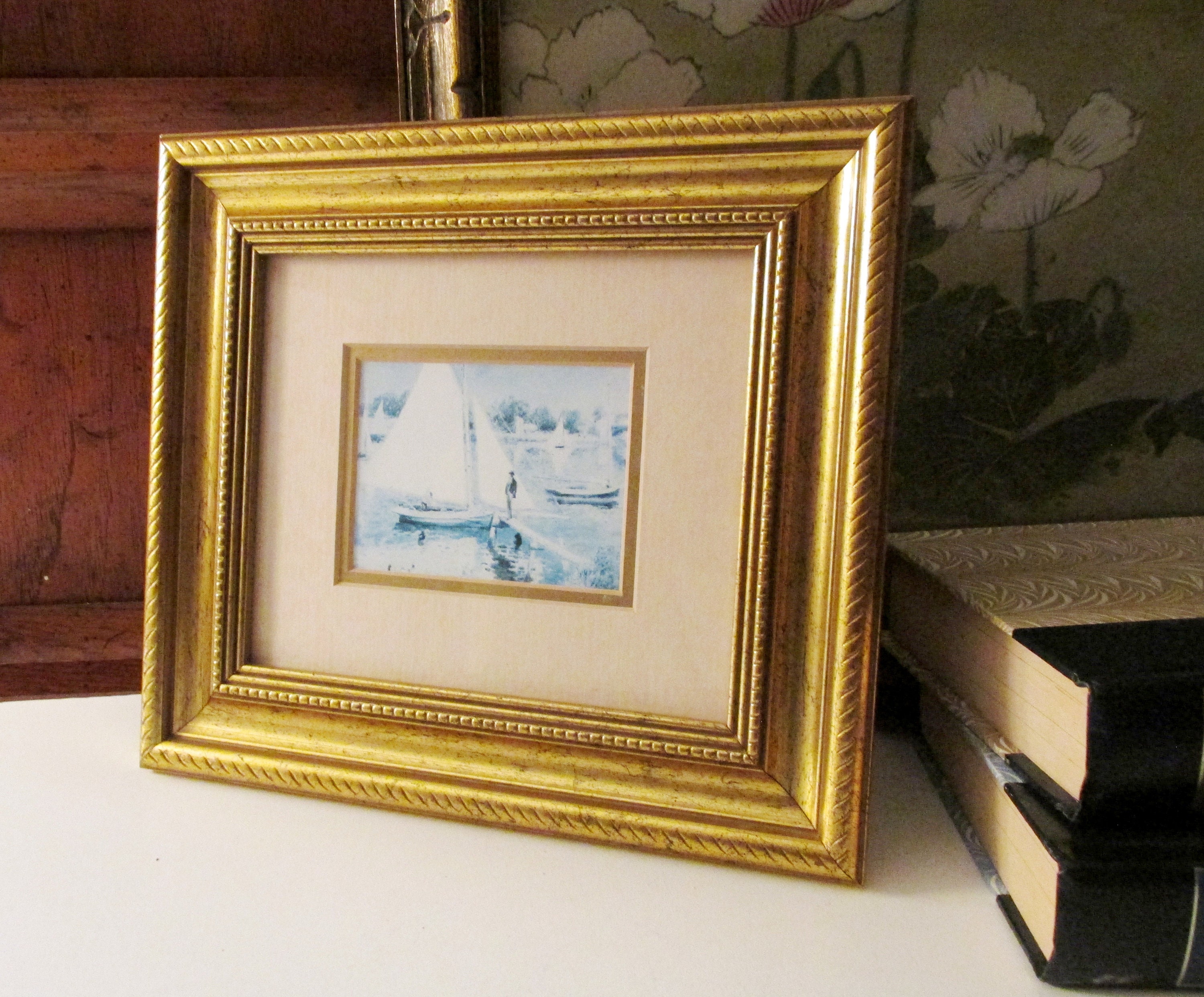 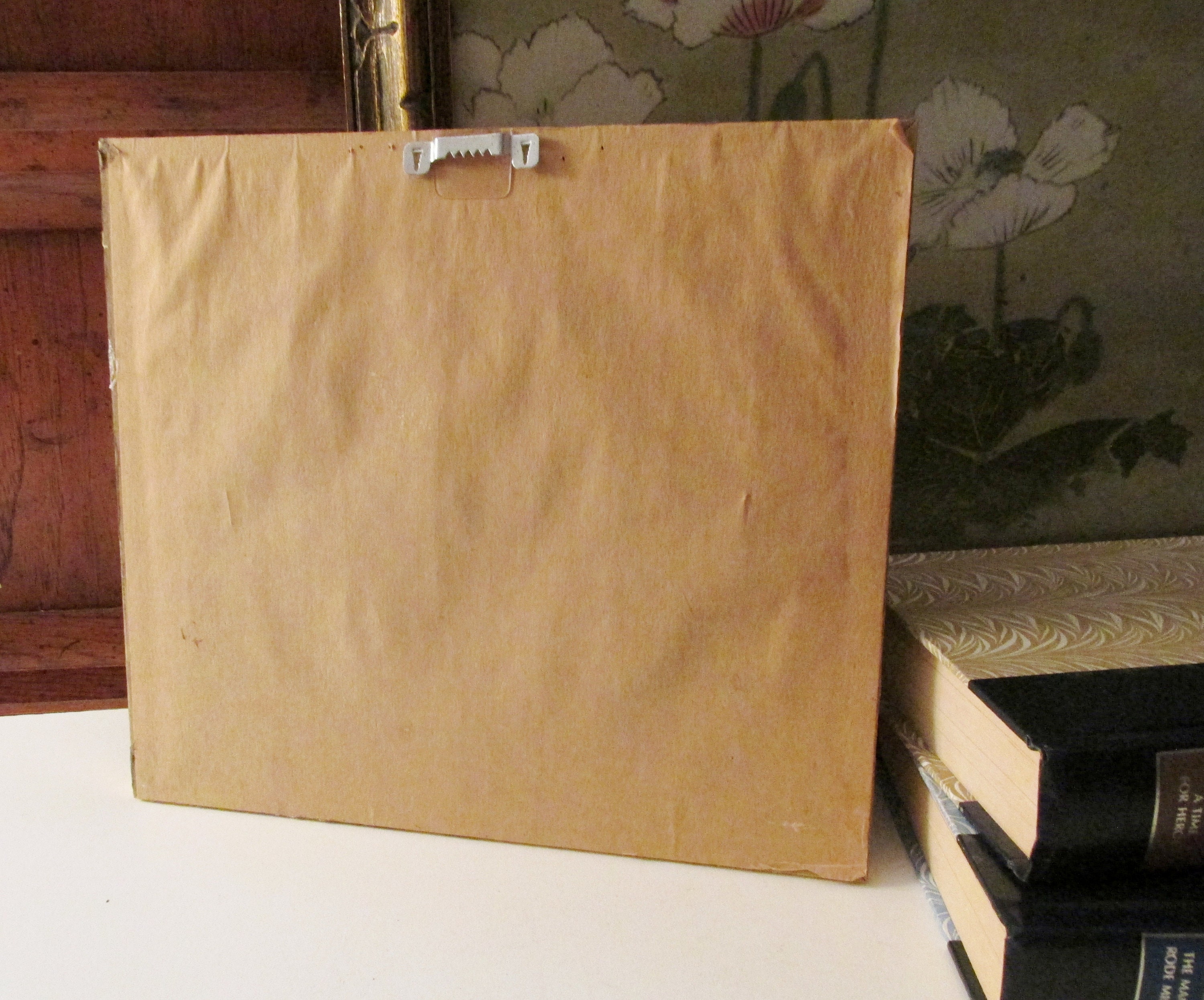 Lovely and classic framed print of Renior's "The Seine At Argenteuil"!
This reproduction of the 1874 painting is a small four (4) inch print, wonderfully framed in a gilded wood frame. Print is double matted and ready to hang.
A charming picture for any decor!
Frame is approx. 9"H x 9.75"W

The original oil on canvas painting is on view at the Portland Art Museum, which has the following info about the painting:
"The quaint river-town of Argenteuil, on the banks of the Seine River, is a quick fifteen-minute train ride from the center of Paris. During the 1870s and 1880s Argenteuil became an important source of inspiration for the impressionist artists, who immortalized its river views, bridges, streets, and gardens in their paintings—setting it apart from neighboring villages.

One of the foremost “myths” about Renoir and his work is that he was primarily known for his paintings of human figures—often well-endowed women, and thus contributed very little to plein-air landscape painting. The Seine at Argenteuil, painted in the summer of 1874, clearly dispels any doubt that Renoir was as accomplished a landscape painter as Monet, Sisley, or Pissarro, achieving an utterly personal style. Interestingly, Renoir painted this work alongside his friend Claude Monet, whose painting of the same scene, Sailboats at Argenteuil, 1874, is in a private collection in Switzerland."

PayPal is the only method of payment accepted at The Gilded Tassel. Payment within 24 hours is greatly appreciated. If no payment or contact has been made within 24 hours, the item will be relisted.

I am a quick shipper...almost all items ship in 1-2 business days. I pack for safety, with lots of bubble wrap, clean recycled boxes or new USPS boxes. I want you to start enjoying your items as soon as possible:) In most cases I use USPS Priority Mail and UPS Ground shipping on heavier items. Tracking # will be provided.
INTERNATIONAL SHIPPING:
I am happy to ship internationally....please convo for a quote for your country. Please bear in mind the following:
* I use First Class International Mail for buyers outside the U.S.
* I am not responsible for any duties, taxes or fees that result from international shipping.
* No tracking is available on First Class International mail. If you prefer Priority or Express Mail International, please contact me for a quote.

I want you to have a wonderful shopping experience here and I would be happing to combine shipping for this shop and TheSilvertassel.etsy.com...my sister shop for vintage party, tabletop and home decor of the Silver nature,

Your order will be shipped to your PayPal address. If your etsy and PayPal shipping addresses don't match, please let us know which address to ship to.

Finally, If you'd like to purchase insurance, please convo prior to checkout. For items over $75.00....I will include insurance in the shipping costs

I do my best to photograph and/or list any areas of concern (dents,scratches, wear, etc.)
Usually these items are sold "as is". Due to the vintage nature of the items on this site, all sales are final.
Feel free to contact me with any questions you may have prior to your purchase.

Thank you for your business!

I want you to be happy with your purchase and feedback is always deeply appreciated. If you have any problems, please contact me before leaving neutral or negative feedback. I'll always do my best to make sure you are a satisfied, and hopefully, a repeat customer

0 items in your cart